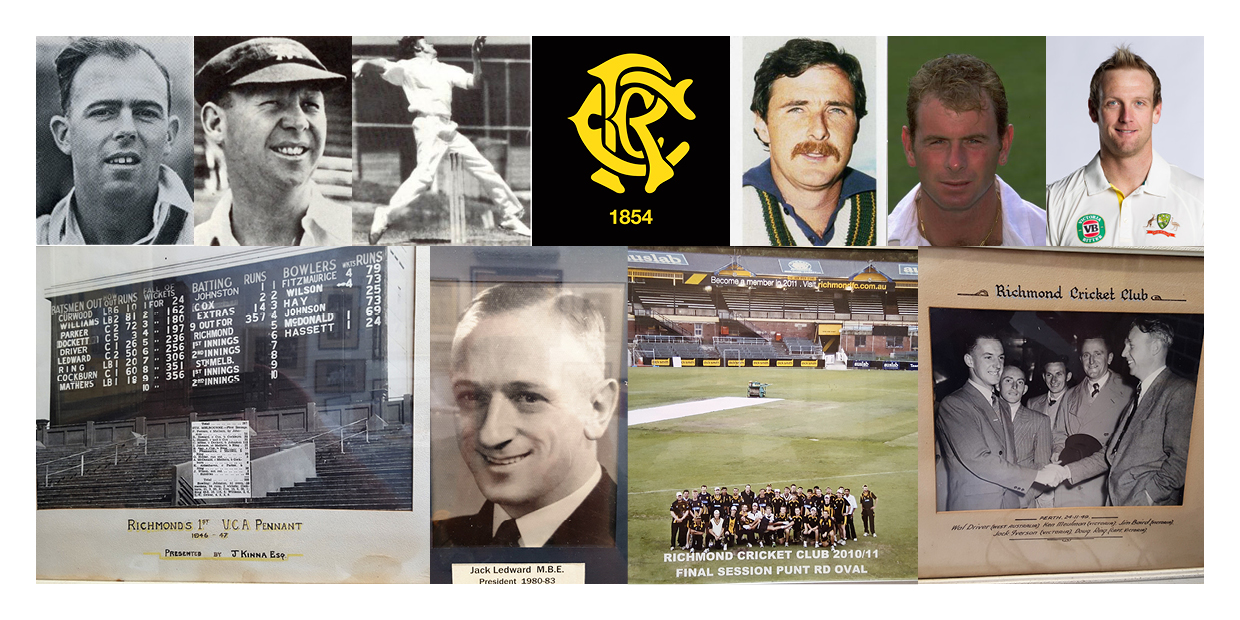 A Brief History of the Richmond Cricket Club

A group of Melbourne gentleman gathered at the Richmond home of Mr. W.S. Woolcott in January 1854 with the idea of forming a Cricket Club that would carry the name of the soon to be established Borough of Richmond. The newly formed Committee appointed Mr. Woolcott to the position of Club President and so he became the first of only 21 men who have held this coveted position since 1854. It was resolved the Committee should work towards forming a team and seek a suitable local site to play cricket on.

At the Club’s first official meeting held in the Punt Road Hotel (now the Royal Hotel) in October 1855 an application was made to His Excellency the Governor of Victoria seeking permission for the new Club to play matches on the Richmond paddock directly opposite the hotel and next to the site occupied by the prestigious Melbourne Cricket Club, who came there in 1853. On the 18th of November 1855 permission was granted and the Richmond Cricket Club took possession of the sought after site and although the boundaries have altered several times since, the famous Punt Road ground is still our home. It must be assumed that some games were played before, but the first documented cricket match that Richmond took part in was against the Melbourne Club on December 27th 1856, with Richmond winning by 40 runs.

Intercolonial cricket also commenced in 1856 and in the period up to 1892, Richmond sent 37 men to represent the Colony including 2 captains in George Marshall and the well known sportsman Tom Wills who in 1859 was the person most responsible for forming the framework and rules of Australian Football. In 1859 competitive cricket in Melbourne arrived in earnest. A competition with the winner taking the “Coppin Challenge Cup”, named after the theatrical entrepreneur and a founding member of the RCC the Honourable George Coppin, was first played for. This Trophy is believed to be the oldest cricket cup in the history of Australian Cricket and can be viewed in the Museum at the Punt Road ground.

When England and Australia first played cricket on equal terms in 1877, the period has been described by historians as the dawn of test match cricket. RCC had two players in the initial Australian Eleven in Tom Kendall and John Hodges. In 1882, Australia selected the Richmond player Sam Morris to play his one and only Test match. Morris was born in Hobart of West Indian parents and he became the first black man to represent Australia. His score of 280 against  St Kilda at Punt Road in the 1881 – 82 Season is the highest on that ground and the best by any Richmond player ever.

Other prominent Richmond players to play with distinction for the Colony in that period included Gid Elliott, Sam Cosstick and Dick Wardill. As well as providing the Colony and Australia with fine players, the RCC won Premierships in 1859 – 60, 1860 – 61, 1876 – 77 and 1894 – 95, but after the VCA competition started Richmond had to wait until 1946 – 47 to annex their first in the new competition.

Only one Premiership from the turn of the century up to 1954, when the RCC itself turned one hundred was less than impressive but at the same time it produced Test cricketers in Dave Smith, Leo O’Brien, Ernie McCormick, Doug Ring and Bill Johnston, along with some of the finest Administrators in Australian cricket that included George Bennett, Ern King, Dave Chessell, Perc Maybury, Merv Rankin, Jim MacDermott, Jim Cook and many other Club stalwarts who kept the Yellow and Black colours flying high.

Richmond champions of that period Les Keating and Jack Ledward headed a fine group of players for the State that included the dashing Wally Driver and Bill Cockburn, former New South Wales player Arthur Allsopp, Stan Smith, Clive Sindrey and George Newstead just to name a few. The 1946 – 47 success could be attributable to other fine Richmond cricketers in Nelson Cox, Harry Mathers, Laurie Curwood, Doug Williams and Les Docket. Unfortunately Newstead and that wonderful and long serving Club delegate Charlie Stuckey missed the glory because of retirement the previous Season after long and fantastic service to the Club.

In the 32 years to 1976 – 77 it took Richmond to win another First Eleven Premiership, the Club was not completely devoid of success winning five VCA Championships, two Second and two Third Eleven Premierships. Two exciting cricketers in Jim Higgs and Graham Yallop from the Tigers worked their way from the Richmond First Eleven to Victoria and then the Australian Team to proudly represent their country. Eight more State players were produced in those years and two who were not selected but should have if you look at the wonderful and consistent efforts were Graeme Paterson, 1817 runs and 505 wickets and Jeff Russ 2287 runs and 434 wickets. The RCC wicketkeeper and games record holder David Cowper along with fine batsmen Peter Williams and Russell Sincock were others to have a taste of First Class cricket and with better fortune could have played more.

The backbone of the Club in the early ’80s was a group of wonderful cricketers and fantastic clubmen like the Victorian fast bowler John Leehane, class batsmen Ian Simpson, Andrew Quarterman, Rod Byrnes, Warren Whiteside and pace bowlers Peter McKay and Andrew Burridge. Hard working administrators led by Secretary Russell Collins saw a wonderful group of young cricketers arrive at Punt Road in that period to compliment the experienced Geoff Richardson, Brian Rogers, Jim Higgs, Michael and Paul Quinn, and Graham Yallop who after completing an outstanding century in our 1982 – 83 Grand Final win took up a coaching position with another Club. In 1987 Richmond appointed former Victorian and Australian player Ray Bright Captain and Coach and his contribution to the Club will remain as one of the more significant aspects of Richmond’s long history. During this period the Club won another First Eleven Premiership in 1989 – 90, a Club Championship in 1987 – 88 and the Second Eleven won Premierships in 1987 – 88, 1988 – 89 and 1990 – 91. The Thirds were also successful in 1988 – 89.

The Richmond Cricket Club had great difficulties in meeting its financial obligations from 1990 to 1995 because of the enormous problems with the failed Social Club and only for the determined efforts of the President Michael Quinn, Directors Peter Davies, Bill Harrison and other members and supporters saw the Cricket and Football Clubs form a joint corporate structure to set up a successful working relationship.

It took the Club some five years to recover from the dramas of the early part of the decade and during that period was held together in the batting by Michael Foster, David Harris and Matthew Galbraith, and the bowling by Paul Coloe and Stuart Clark, and the hard working record breaking wicket keeper Gavin Holland. These players and the exceptional talents of the all rounder Cameron Parker kept Richmond in the game.

The season of 1997-98 saw the start of a Tiger renaissance that set the scene and structure for Richmond’s fifth First X1 Premiership in 1999-2000.  Captain David Harris, Gavin Holland and Paul Reiffel, players from the last Tiger flag of 1989-90 were joined by two players of immense talent in the Victorian first class players Ian Hewett and Jason Arnberger along with two fine bowlers in Matthew Albers and Allan Wise.

The decade 2001- 2011 was a mixed bag for the club, they experienced both highs and lows.  Premiership player Sam Taylor retired in 2010 with over 4,500 runs in the book [but returned from retirement later – Ed.] and young Tigers Adam Crosthwaite, Aiden Blizzard, Will Sheridan and Ryan Carters from time to time joined Cameron White and Allan Wise in the Victorian side.  Premierships for the 3rd X1 in 2006-07 and the T20 team in 2005-06 were all we had to show for the hard work of many people.

In 2000-01 an English import Paul Collingwood brought great pride to all at Tigerland by becoming our first Ryder Medallist. Collingwood went on to become a successful international player for his country, and captain of their Limited Overs team. Talented cricketer Cameron White, who was welcomed into the Tigers Den in 2005, became the club’s 12th Test player when he was selected to play for Australia against India in 2008. Cameron became a regular in Australia’s Limited Over Teams, he captained his country in both the 20/20 and 50 over formats.

During the 2004-05 Season the Tigers celebrated their 150th anniversary but for the next 5 years many problems began to surface regarding the clubs standing at the Punt Road Oval. The Richmond Football Club’s letting of the ground for the A.F.L final series and major rebuilding saw the Cricket Club lose their changing and social rooms.  Practice and home ground match conditions became less than favourable, the Third & Fourth X1s were struggling to find playing fields and only for a dedicated group of players and officials led by the club’s resourceful 21st President Ken Sharp (2001 – 2018) and [then] Vice President Jim Higgs the club has survived.

In spite of the hurdles confronting them the board of management introduced a Hall of Fame initiative in 2009 and, at the completion of the decade, 16 of the finest Tiger players and officials have been inducted.  Former great player and administrator Jack Ledward became the club’s first Immortal.

During the 2010-2011 season productive talks were held between the board’s of the Cricket and Football Clubs and the Monash Council as to the Tigers moving from their home of 157 years, to a much improved facility in Melbourne’s East.

At a special meeting of members held on the 16th of December 2010 a resounding yes vote saw a resolution for relocation to Central Reserve at Glen Waverley passed.  A fine turn out of former players and officials attended the Punt Road Oval on the 5th of March 2011 for what was the Tigers’ final game at that venue.

The club’s brave move from Punt Road proved to be an instant success.  Our senior team stormed from a lowly 15th position in 2010-11 to annex the club’s 6th premiership in 2011-12.  Captain Alan Wise and Coach Jarrad Loughman led a much improved younger group of players including Ryan Carters, Daniel Sartori, Will Sheridan, Brenton McDonald, Matthew Shimell and Ben Torney to great heights.  These young men were strengthened by the two experienced former South Australian players, Andrew Delmont and Graham Manou (Australia’s 411th Test Cricketer). In all, the First X1 used 18 players during 2011-12 and this group compares favourably with the formidable Tiger lists of the past.

The volunteers and staff of the R.C.C. under the direction of long serving officials, (then President) Ken Sharp, Jim Higgs, Ron Collins, Jim Hamilton and Peter Wells, should be congratulated for their diligent efforts in tough times, they have set the club up for an exciting future in the City Of Monash.

This  brief history of Richmond Cricket Club is included in each issue of the Annual Report as a reminder of past achievements and deeds on which the modern club is founded.

Fresh From The Blog